5 Worst Songs of The Decade 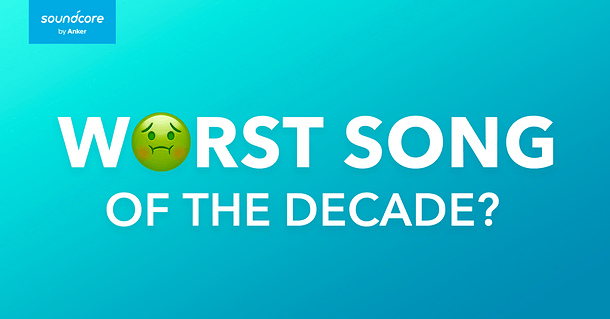 The biggest music celebration of the year, the Grammys, is fast approaching. So I thought I’d squeeze in a little more stone-cold cynicism before the tawdry glitz and glamour of the music industry’s biggest awards ceremony.

To get things started, I surveyed the Soundcore team to learn what the office’s least favorite songs of the decade were. This immediately proved to be a mistake. My questions gave rise to several hours of YouTube and Spotify performances as people reminisced about ‘Friday’, ‘Barbra Streisand’, and worse. It was much more peaceful to lock myself in a meeting room, trawl the internet, and steal ideas from other blogs about terrible songs. So that’s what I did.

And without further ado, let’s start the countdown! DRUMROLL PLEASE

Straight in, at number 5:

If we ignore the casual racism, the strident autotune, the awful lyrics, the mind-numbing melody, the tedious video… and… hmm, doesn’t look like there is anything left to ignore. It appears there are no redeeming features and it’s all absolutely awful.

Justin Bieber would be a lot harder to hate if he wasn’t such an insufferable little turd. I could have chosen any of his songs from the last ten years (Baby was one of the decade’s first releases in January 2010) but this feels like his most iconic, and therefore most annoying. If you don’t believe he’s bad, just ask China, where he has been banned for being a turd (official wording may differ).

It keeps getting worse, at number 3:

A narcissistic statement that lacks too much self-awareness to be taken as the satire that it was intended as. Indeed, the thousands of millennials who adopted this song as an anthem for their vacuousness seemed to miss the memo that it was trying to make fun of them. Oh, and the tune is so mind-numbingly forgettable that I can nearly forgive my mom for all the years of complaining that ‘EDM is just noise’.

Almost at maximum badness, at number 2:

I’ll be totally straight with you here, I’d never heard of Brad Paisley (let alone this song) before I started putting this list together. So its very presence is a testament to just how off-the-wall insane it actually is.

Ostensibly, it’s about a man in a Lynyrd Skynyrd t-shirt apologizing on behalf of his racist ancestors to a black person working in Starbucks. What could go wrong? Well, his problems begin when he uses 8 verses of ignorant drivel to say he’s sorry. And not even LL Cool J’s lyrical deftness can redeem it. If you don’t judge my gold chains, I’ll forget the iron chains. Yikes.

And the absolute worst song of the decade, at number 1:

Sure, the previous song contained undeniable racism. Yes, Justin Bieber could possibly be Satan himself. It’s true, The Chainsmokers perpetuate narcissistic culture. So how on earth can a cute kid’s song about a lovely little fish be worse?

Baby Shark is a psychological warfare experiment developed by the CIA. Someone has written a song so sickeningly sweet, so unbearably cheesy, and so unforgettably catchy that it’s a danger to anyone without hearing protection.

The only other possibility is that it was written by The Shark Propaganda Department to lull us into a shark-loving sense of security before they start a major offensive to rid all surfers of their feet. Either way, it scares me.

So that’s my list! What do you guys agree and disagree with? Let’s see your own lists in the comments below and I’ll pop in to show you where you’re wrong if your list differs from mine.

Baby Shark is a clear winner for worst song. Come on.

Noooo This is the worst song ever

Baby shark is pretty terrible. I don’t know the other ones, but I’m too scared to listen to them

Your ears will never be the same.

Baby shark was around when I was a kid, there is no sense in which that is a song from this decade.

It is actually old enough to have gone back around and hit retro awesome again.

No argument with any of the above, and “Old Town Road” is among the worst for me. I can’t stand that one.

Music is subjective, so I’ll just say anything Drake released can take up those five slots. Lol

Not sure but my son does his own version to the baby shark song. It is called "Daddy fart, toot toot toot… " lol

I listen to Brad Paisley (haven’t in a few years) some of his songs are good. But that song is bad and he really needs to go back to singing about pretty ladies, beer, and partying.

As to worse songs, I have to spend some time thinking. But off the top of my head, anything by Justin Beiber. Another song would be What Does the Fox Say… Its catchy, but its bad…

Baby shark would be definitely one xD.

One word for all the terrible tunes of the decade… Bieber

This currently has me scratching my head, as I can’t think of one…either my music taste is very closed (most likely) and/or I’ve just managed to avoid every bad one

Too many.
Not worth to publish!