A friend in China told me that the Soundcore Q40 is ready to release. It won’t have any aptX codec. It will have LDAC as High Resolution wireless codec similar to the Q35. It seems that aptX is dead, even Sony doesn’t support aptX anymore. Build quality is much more better than the Q30/35 line. The Q40 will have a completely new design similar to the Sony WH1000XM5. BUT: My friend in China told me that ANC will be poor again.

This thread will probably be closed as it violates forum rules. @Duane_Lester

Reminder what you last wrote 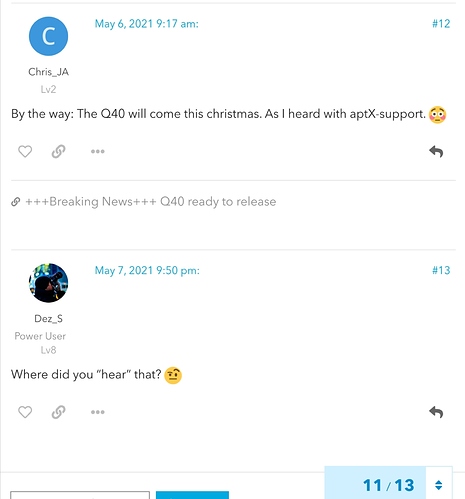 By all means speculate but please state you are.

This is me speculating.

With the Q30 / Q35 getting long in the tooth, the Q35 released February 2021 - over 18 months ago - speculation is rife of “is a Q40 coming?” So time to get out your wishlists of what you’d like included, for the engineers to consider. poll Comment for anything you want included, or kept and not changed, below!

Any news about a Q40 coming? OVER-EAR

Hi folks, as Sony released the WH-1000XM5 some weeks ago I wonder if a new premium NC over-ear headset from Soundcore (I guess it will called Q40) is ready for launch. Are there any rumours?

The release is just known by soundcore alone and anything else is just rumors or best guess. It was a month ago that you had wrote any rumors to now it is a coming. I would rather leave it to when it is released than making unconfirmed guesses

As stated with 18 months removed, it is probably likely it would be soon as you want to get it out before the holiday sales.