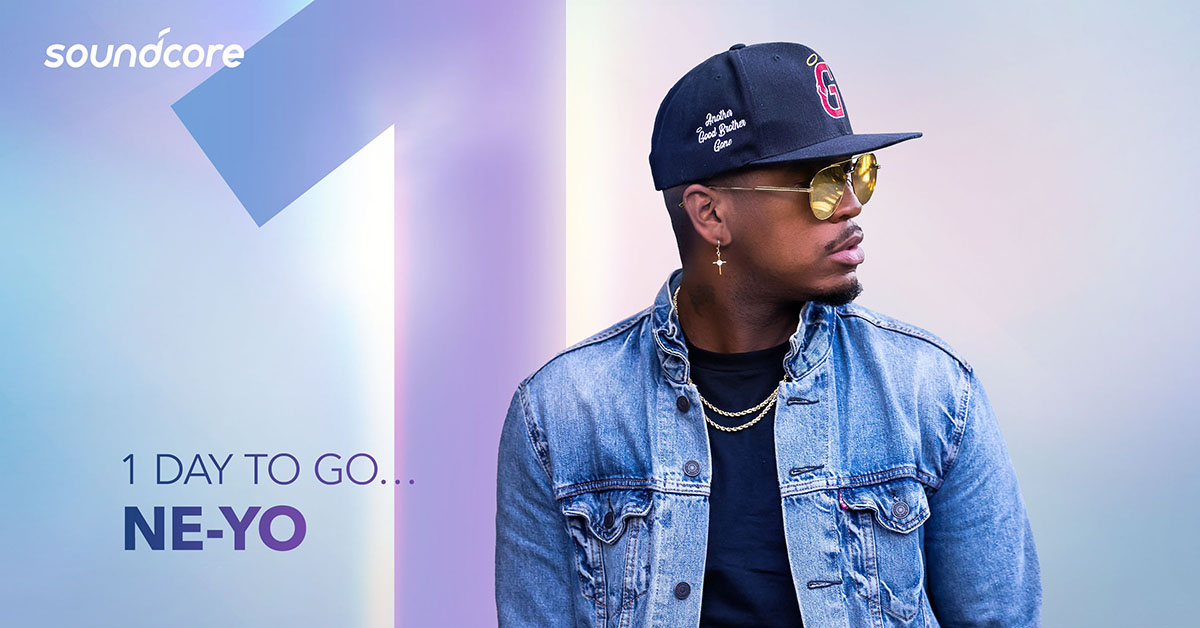 Meet NE-YO, the final Grammy Winning Artist joining us for the #AudioEscape! Are you So Sick of waiting for the launch of our all-new earbuds? You only have to wait 1 MORE DAY and then all will be revealed

So first, let’s get to know more about NE-YO and his extraordinary career.

The Motown Records/Compound Entertainment recording artist got his big break when he wrote “Let Me Love You” for Mario, a song which spent a total of 9 weeks at No.1 on the Billboard chart.

Question: Do you know how NE-YO got his stage name? It was given to him by his friend, rap producer Deon “Big D” Evans. At the time, NE-YO prided himself on how fast he could write a song and his friend told him “you’re like the Neo of music” (saying he could do things in music that other people couldn’t, much like Neo in the Matrix).

NE-YO’s first solo single, “So Sick”, hit No. 1 on the Billboard Hot 100, and was certified Quadruple Platinum!

So far in his career, NE-YO has sold more than 20 million albums worldwide, has had 3 albums reach No. 1, has been nominated for 14 GRAMMYs, and won 3 so far! NE-YO’s first GRAMMY win came in 2008 for Best Contemporary R&B Album with “Because of You”, the album which features one of his most iconic hits.

NE-YO has had a constant stream of hit songs over the years including, “Sexy Love”, “Closer,” and “Push Back” featuring Bebe Rexha and Stefflon Don.

He has proven to be as powerful with his pen as he is in the recording studio and on stage. NE-YO has penned some huge hits, including Rihanna’s “Unfaithful”, “Russian Roulette”, and “Take a Bow”, and Beyoncé’s 2006 breakup anthem “Irreplaceable” which received a GRAMMY nomination for Record of the Year. He’s also written tracks for artists such as Jennifer Hudson, Usher, Carrie Underwood, and Celine Dion.

NE-YO’s top songs on Spotify have over 2 BILLION streams combined and his latest song with Jeremih, “U 2 Luv”, has already racked up over 13 million views on YouTube.

Outside of his singing career, NE-YO has some extensive film and TV credits including “Save the Last Dance”, “Battle: Los Angeles”, "Stomp the Yard”, “Empire”, and “Step Up: High Water”, now in its 3rd season on Starz. Recently, NE-YO just wrapped his 4th and final season as a judge on NBC’s “World of Dance”.

NE-YO is also the global ambassador for LÜM—the music streaming app that Soundcore has partnered with to introduce up and coming musicians to our fans. NE-YO is extremely supportive of LÜM’s goal to change the digital music landscape and provide all the tools artists need to grow their careers. You can find out more about LÜM and Soundcore’s partnership HERE.

Finally, I can reveal that NE-YO himself will be joining us on the livestream launch for our new earbuds to perform and discuss our partnership with LÜM! It starts at 09:00 AM PDT so don’t be late!

Sweet. Hope to remember to be there tomorrow at 12 my time.

Hopefully it turns out well with no streaming issues.

I cannot wait for the reveal tomorrow, and love that yall are working with Ne-Yo

Hopefully can manage to get time to check it out

Yeah… the closer it gets, the more meetings I am getting for work. LOL

It’s been a while since I’ve listened to any of his songs so can’t wait.

Yesterday was my first day back after almost 4 weeks.

Covid and annual leave over Christmas.

I spent most of yesterday catching up on emails and accepting meeting requests for the next few weeks.

I need a lottery win

Excited for his performance

Welcome back and hope you are well on the mend.

You had this one right it seems, well figured.

Never heard of him until the launch event. Another great artist that you guys introduced to us

His performance was sooo good