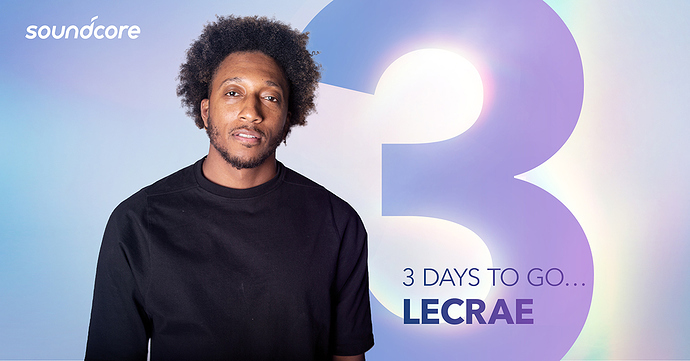 We’re getting into the home stretch. Only 3 days left until Soundcore’s biggest announcement yet. As you know, we’ve been busy assembling an all-star cast to help us with this year’s initiatives, and today’s artist is no exception!

Join us in welcoming hip-hop luminary, Lecrae, as our official Day 3 GRAMMY winning artist. You might recognize him by his hit 2020 collab with John Legend, “Drown.” If not, listen up:

As you can tell from this cut, Lecrae puts every bit of his heart into his music; tackling the heaviest issues imaginable while trying to help his audience face them with hope and positivity.

He is very outspoken about how his faith informs his musical performances, and that’s borne out in his two GRAMMY Awards: 2013’s “Best Gospel Album” for Gravity and 2015’s Best Contemporary Christian Music Performance/Song for the song “Messengers” (listen below).

A Houston native, Lecrae is based in Atlanta, where he completed his latest album Restoration. Of this album he stated his hopes that it would help to communicate "hope, healing, and restoration available if you seek it.”

Outside of his musical pursuits, Lecrae is a prolific activist, having partnered with the Love Beyond Walls charity to bring food and safe hygiene stations to people in Atlanta during the COVID-19 pandemic. In his many essays on Billboard, he’s also stressed the importance of mending race relations as well other vital social issues.

Lecrae also boasts many fans in the world of professional sports, with star athletes in the NBA, NFL, and even the WWE (if you consider that professional sports) citing his work among their preferred pre-game tracks. He even created the theme song for ESPN’s commentary program Coast to Coast.

QUESTION TIME: If you were a GRAMMY winner and wanted to give back to your community, how would you do it? What issues would you most want to tackle? Let’s hear it and maybe make a few resolutions of our own together!

As always, stick around for Day 2, when we’ll bring @Hannah back to introduce our next incredible artist!

I thought Lecrae but could not find picture and fell asleep when son wanted me to read him a story.

Someone else I know of. I’ve posted some songs for new music Friday’s before.

Is this a convoluted reason that he wasn’t your prediction?

I listened to both songs, not someone I was familiar with.

This is the song I’ve posted before.

Yes yes yes Lecrae is one of my favorite artists ever

Another artist I kind of know

Great song, and thanks for bringing back the prev share.

I had forgotten about this song.

We are getting closer to the reveal!

Mashup with my favorite artist ever (wait for the bridge):
David Crowder feat. Lecrae - Shadows