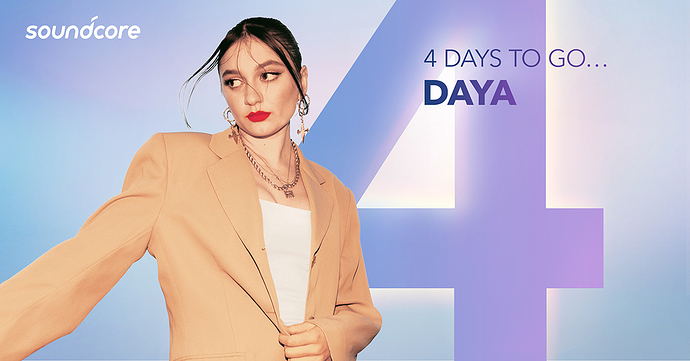 Meet Daya, a singer-songwriter from Pittsburgh. She is the next GRAMMY winning artist we’ve partnered with for the release of our all-new earbuds!

Do you remember when you were in high school and dreamed of making it big as a singer? For most of us, the furthest we got was the school talent show, but for Daya that dream came true.

Her first single, “Hide Away,” which was written at a songwriting session in Los Angeles, got sent to radio stations, became a hit, and reached the Top 10 on Pop Radio despite the fact Daya wasn’t signed to a record label at the time.

How did Daya get her stage name? It’s actually the Hindi translation of her first name, Grace, and is a homage to her Indian Grandfather and heritage.

Daya went on to collaborate with The Chainsmokers for their hugely successful song “Don’t Let Me Down”. The song won a GRAMMY for Best Dance Recording in 2017 and both the song and the video have over 1 BILLION streams and views each:


This is not the only time Daya has successfully collaborated with DJs on a track. Over the past few years, she’s also featured on songs by NOTD, Gryffin and Illenium, and RL Grime.

Daya began playing the piano at the age of 3, and can also play the guitar, ukulele, saxophone, and flute. She’s also been writing songs since the age of 12. Since 2017, she has released a series of stand-alone singles which put her flair for songwriting center-stage.

Check out “New” which currently has more than 150 million streams on Spotify:

And the incredible “Insomnia” which was released in 2019 and has already been streamed more than 120 million times on Spotify:

In addition to putting out singles, Daya’s also had a song, “Forward Motion”, featured on the “Late Night” movie soundtrack and fans of the Netflix series “13 Reasons Why” will recognize Daya’s song “Keeping It In The Dark” from the 3rd season’s soundtrack.

In October 2020, Daya released “First Time”. It was written in Sweden and Daya herself described the process as “natural and free flowing”. With a lead single this good, it’s hard not to get excited for the full album that’s coming later this year!

Which tracks will you guys be adding to your playlists?

Nice to meet Daya, I am Duane.

Never thought of “Grace” as empathy so the translation makes sense now. Had to Google the meaning of grace

Maybe my favorite out of all those listed so far… I did like the blue grass quite a bit too.

Didn’t know she sang Don’t let me down great song!

I wouldn’t think of grace as empathy; related, but empathy is a feeling (often passive) and grace is an attribute that is usually active.

Compassion is closer to grace, although there is still some nuance in the differences, and compassion is the meaning of Daya I found online

Learn the meaning of the girl’s name Daya on Baby Name Wizard, your trusted source for baby name origins, popularity and more!

Yep normally when we use the word “daya” at home, it usually means compassion or empathy depending on the context. I didn’t know “grace” had that kind of meaning as well.

Good to know the meaning