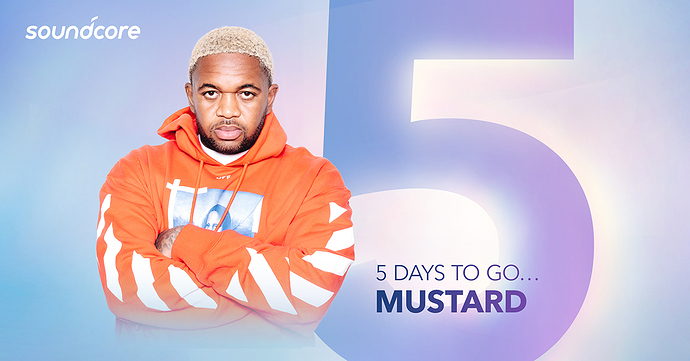 DJ Mustard 1200x628.jpg1200×628 423 KB
Meet Mustard, a music producer from Los Angeles, whose signature sound shaped the music of the 2010s. Soundcore is extremely excited to be joined by such an influential figure in the music industry for the launch of our all-new earbuds

Mustard got into music at age 11 when his uncle encouraged him to DJ a family party. Originally he used the name DJ Mustard as a pun on his first name “Dijon”, however he has since dropped “DJ” and just goes by Mustard now.

Like I said at the beginning, Mustard’s sound is synonymous with the sound of the 2010s thanks to his endless collaborations with some of the biggest acts in the world and his iconic “Mustard on the beat…” intro that makes his songs instantly recognizable.

Honestly, I’d be here all day going through Mustard’s extensive discography, so here’s just some of the highlights:

“Needed Me” by Rihanna

Currently, Mustard’s top 3 songs on Spotify have a combined 1.2 BILLION streams and so far he’s been nominated for 3 GRAMMYs and won one for Best R&B Song in 2019 for “Boo’d Up”, a song by Ella Mai that he produced.


“Boo’d Up” reached the top of the US R&B chart, making her the first UK artist in 26 years to achieve this.

Mustard’s recent song, “Ballin’” featuring Roddy Ricch topped the Rhythmic Chart in the US, and has been certified 3 times Platinum.

So my question for you guys is, if you were a top music producer, what phrase would you use in the intro of your songs? Share them in the comments

Probably not a question I can answer - not a style of music that is on my regular playlists.

Not my fafiurite style but not bad

This is my favorite song produced by Mustard

YAY nice reveal its getting so launch day

Listened to that song yesterday. Best for sure.

This ones good as well