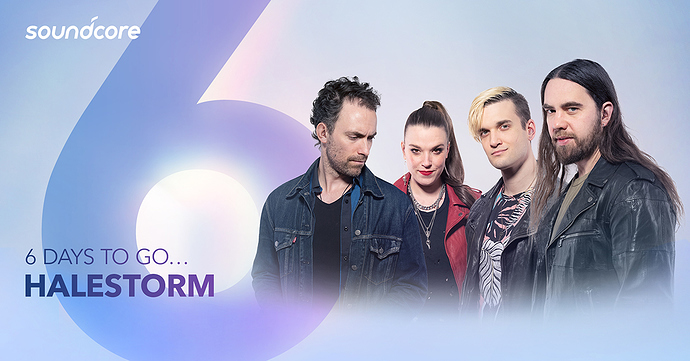 All right, batten down the hatches, Collectivites. It’s time to get serious about winter weather. Now, when there’s a big hail storm a-brewin’, what you wanna do is-

-wait, what’s that!? Ohhhh, you mean the band Halestorm. Well, there goes all the meteorological data I’ve gathered.

On the bright side, I’m super excited to welcome the amazing Halestorm as our next GRAMMY Award-winning act to join us in our countdown this week. Founded by Lzzy Hale (lead vocals, lead guitar, rhythm guitar, keyboard, and more) and her brother Arejay (drums and backing vocals), in 1997, they came rolling out of Pennsylvania to take the rock world by storm. By Halestorm, to be precise.

Since dropping their self-titled debut album in 2009, their accomplishments have only mounted since. Of course, it was the song “Love Bites (So Do I)” off their second album The Strange Case Of… which earned them their GRAMMY award in 2013. Have a listen here:

While they may not be an actual severe weather event, the energy of their music is certainly comparable. Still too is their physical energy for live performances; as Halestorm is known for near-constant touring all around the world. From Alice Cooper to Seether to Buckcherry to Disturbed, you’d be hard-pressed to find another rock act that hasn’t worked with Halestorm on tour!

While the pandemic has put a damper on tours worldwide, Halestorm is ready to get back out there at the soonest possible opportunity, with their next live shows already lined up for this April.

Meanwhile, you can browse their prodigious back catalog to get a sense of what to expect when they come roaring into town. You won’t have to go back very far, either, since their most recent EP, Reimagined, dropped just a few months ago:

I know you’ll be back tomorrow to meet our next GRAMMY winner, so I don’t need to remind you, right? Right?

SUUUPER excited to see Halestorm for day 6. Love their music and they haven’t missed a beat over the years.

I think the one guy in the blue jean jacket looks like my brother.

Heard them for the first time and I have to say I am a fan. Can’t wait to see what they bring to the table for Soundcore

Ahh and another band I never heard of until today. These 12 days will expand my music knowledge so much

Have you ever seen/heard of Halestorm touring near you?

I actually saw them in concert many years ago! Great band!

I’ve been through a hail storm, thankfully we were inside. Saw the hail coming across the lake, was a sheet of white and couldn’t see much beyond.

By time it hit the cabin, was 20 min of loud pop pop pop band pop, and afterwards was 6 inches of pea and grape sized hail left on the deck.

Was quite cool. Literally…

We are so close to the launch!

Can’t wait to see the rest

I heard Lzzy Hale on a lindsey stirling song (shatter me) and enjoyed the quality and power of her voice in that context.

When I tried to listen to Halestorm, it gets drowned out in the noise and turns into something that sounds like a scream to me in many cases. So not as good of an experience. Would love to hear her in more power ballad situations where you can hear the voice.

Kind of like Disturbed, where I LOVE their cover of sound of silence, but most of the rest is just too harsh for me to listen long.

I got to see them a few years ago at Carolina Rebellion. Fantastic band with an incredible stage presence!