Got the Life Q35s earlier this week - have had a chance to use them quite a bit this week, put together some initial impressions and comparisons to the other Life Q series headphones - on youtube at the bottom of this link. But more detailed impressions in a written review here.

I got a blue set, understated color that looks close to black except in bright light. The earpiece covers are a little bit thicker and firmer than the Q30s, but other than that and the color there aren’t obvious differences externally. Band is the same length, size, thickness, says ANC in the same spots, serial number, nearly unreadable device info. The button locations and functionality, the indicator light, the charging port etc - all the same. The mic holes are in slightly different locations - the Q30 has one on the right side front of the outside portion of the earpiece, and one on each side on the back on the inside earpiece. The Q35 also has three - two lower on the back side of each earpiece, and on directly under the aux cable hole (straight down on the right earpiece). In the course of testing, I have picked up the wrong ones more than once and taken a minute to notice, they are very similar. 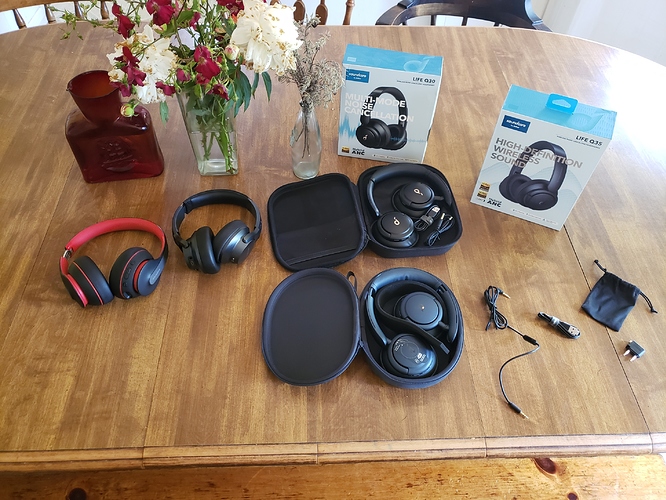 The Q35 case has some differences - rounded, slightly smaller, more of an oval rather than a rounded off rectangle for the Q30, more of a suede feel, no built in elastic bag to hold the extras, etc. It also doesn’t have a molded / shaped lining to hold the headphones, just a cut piece of flexible foam in the middle (not fixed) and a bit of glued down foam for the band to rest on. This is nice in terms of being smaller, but feels less premium since it isn’t formed - not sure which I will actually use more when travelling.

Including a mic through the aux cable was a much anticipated feature. I laughed out loud when I saw how they had done it. The cable connecting to the headphones is still a three pole, so only connecting stereo sound. The computer end is 4 pole. But there is a little black box in between, with a button and a mic. The button pauses, and the mic picks up okay. But this is bypassing the internal mic of the headphones entirely, and I have confirmed you can use it with any of the other Q series headsets to add an aux mic - or any headphones with an Aux IN in general. I hope they just add it to all of their headphones, easy retrofit to make any of them more functional. But to the extent the headset has a high quality built in mic with directional noise pickup, etc, that is NOT being used with the aux plugged in.

The other new highlight was wearing detection. It works - most of the time. Some limitations - the detection is on the right ear only, and if you are lying down, or fiddling with the headphones and the back comes off of your ear a bit, it might stop even though the left is firmly on. All it does is send a pause command to the connected device - and occasionally my computer mishandled that depending on what app was in focus. But that is an OS problem, and it works reliably on my phone and generally on the PC.

The sound quality on these is good - but I am not an audiophile, and can’t distinguish between these and the Q30s in practice. Tried LDAP on my Samsung Galaxy S9s - it was listed as an option, the check marked worked, but no playing around with source files to make sure I was getting higher quality from spotify or mp3s really seemed to make a difference. Sound quality noticeably degrades when on a call profile (headphone and mic), as with all bluetooth headsets.

ANC does the job, better than the Q20s, similar to Q30s, a little worse than the Jabra 85H over ears I have which are a firmer fit on my ears (and thus uncomfortable over a long time period). The Liberty Air 2 Pros are the best of the lot at ANC when they will stay in my ears, which requires staying fairly still. I have tried them in various environments (indoors with kids, simulated loud engine sounds, outdoors) head to head against the Q30s, and can’t tell a difference. I have not tried them on an actual plane yet, will update when that happens.

Transparency mode is nice for walking along a street to hear cars coming. You can definitely hear your surroundings, but everything has a bit of a sharper tone, and it isn’t really practical to have a conversation while wearing them.

Multipoint connections are very handy, and I have these paired to both my computer and my phone at once. Once paired, it mostly works well, handing off back and forth depending on the music source / incoming call, etc. A few minor issues - if it pairs to my phone first on power on, it won’t connect to the computer at all - trying it manually fails. Have to disconnect from the phone, pair to the computer, then reconnect to the phone. And occasionally while paired to two devices I have gotten bursts of static or other random sound blips or breaks in my music. That has never happened while connected to only one device, and I fixed it by disabling bluetooth on my phone to keep listening on my computer, pretty sure it is related.

Updated to add: if your devices have different bluetooth versions (for example, 4.2 on my laptop and 5 on my phone) you have to connect the lower version device first. That explains the connection issue, thanks @The_Professor.

Battery life has been solid - it arrived half charged, and after most of two days of use was down to ~10%. Since then another three days or so has taken it from 100% back down to 40%, with them on around 8 hours a day. So 40 hours is a good estimate for full duration. USB-C charging works great, and 5 minutes of charging really does get hours more use, otherwise I am just leaving them plugged in for a few hours and they are fully charged.

Overall, these are comfortable for all day wearing, sound great, and do a decent job of muting out background noise in many situations. Hearthrough / transparency makes them more practical for walking. And the battery life means they last plenty long. If you don’t have ANC headphones yet and want some, these are a great choice. Probably wouldn’t rush the upgrade if you already have the Q20s or Q30s - I think a few firmware fixes may be coming. If you NEED top tier noise cancelling, there are a few better options for a lot more money. But these are excellent in their range.

Thanks for your Q35 review, video, photo and comparison of all Q series headphones.

I didn’t remember running into this on the Q30s, and had to check versions. My almost two year old Galaxy S9 has bluetooth 5, my one year old laptop has 4.2. Another sigh of irritation at the specs chosen by IT, and that is probably the issue.

Bluetooth 5.2 is coming. So fresh problems!

Thanks for putting in the time and effort required to make this review. Comparing them to all the different Q models was particularly helpful for me.

That’s nice to know. I haven’t gotten a chance to mess around with the cable yet.

Very nice review and to the point video,