I was looking in the soundcore app and caught this in the main area for my devices.

It shall be interesting to see what this new product.

Seems to be another Flare model.
We have so many now.
TOO MANY!

In my region, this is not in the app yet.

Showing up in my app this morning. From the icon shown in the app, you could be right @sodojka

@Craig_Paterson I do not have this icon in the application yet .

I was checking for the L3P firmware update last night (which still hasn’t arrived for me yet) and didn’t see it, but it was there when I checked after seeing this post from @Duane_Lester.

Thought this type of thread and comments about new stuff got you a lump of coal?

That’s it!
A light chain.
I would get crazy when using these.
But the young ones will like for sure!

I have it on app too 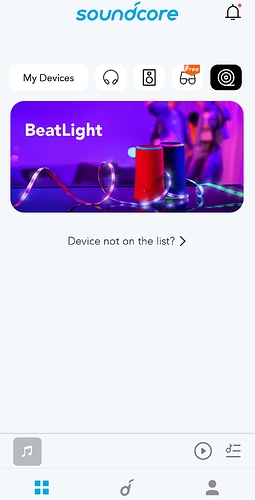 I do have a thought though…

I made the thread as the beatlight is listed in the soundcore app but may need some additional guidance.

I know an updated TOS message was done on Anker but people were having issues trying to determine on what was a TOS violation thread and what may not be one and could use some examples.

So the question comes are products that show up in the app but not released considered in that gray area as something we do not talk about until they are out or is it acceptable to discuss them a little but maybe with limited info other than to acknowledge that it existed.

I think somebody mentioned on Anker that a product was shown in China and would that be discussed even though it is not shown in other areas.

So my question is two fold.

Would this thread need to be closed or it is ok as long as other sources are not brought into the thread?

And could the admins come up with some additional explanation/examples in a thread for the Anker and Soundcore community so that it will be easier for them to know or understand if a topic or comment may be in violation of the TOS.

Just a thought and thanks for any response

I am not sure, but for me it’s pretty simple…

If it isn’t for sale in your region, don’t post any info about it here until it is.