I was watching 3 parts of the serial Vigil.
Its about a submarine.
But the nicest thing is the song : Fuel to Fire by Agnes Obel

Here is the full version!

Today I will watch “Das Boot”
Have seen it often and the title music is not bad too.
Klaus Doldinger.

Das Boot is my favorite Submarine movie. I have it on DVD. I think I need to watch it again soon.

Of course it is!

There was a kind of “remake” in German TV recently.
A lousy “remake” and some scenes were really stolen from the original.
(direction Wolfgang Petersen)

There are 3 Versions around.
The movie, the director’s cut and a serial 3 parts (TV).
These 3 parts are absolutely the best.

Do you know the replica of the interior can be visited here in München?
(Bavaria studios)

I am an Uboot enthusiast.
Have you read the book from Lothar Buchheim?
Its worth to do.
Its one the best (Anti) war books I know.

I have the original uncut version which is 2 DVDs and 293 minutes long.

I saw the miniseries version. IIRC it’s longer. I think I saw it online somewhere.

Unfortunately I’ve never read the book. It’s cool they have a replica of the interior.

I’m also a big submarine fan. I have lots of movies.

To name just a few. 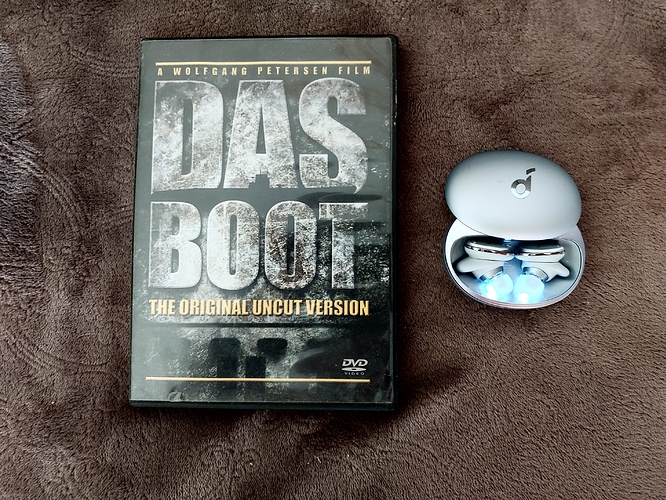 I was just doing some research and I have the Miniseries version. That’s where I saw it.

" The miniseries version was released on DVD in 2004, as Das Boot: The Original Uncut Version , also with enhanced audio and video quality. It omits the episode opening flashback scenes of the 1984 television broadcast so is slightly shorter, running 293 minutes."

I know that U571
Too much fiction.
Never possible.
But that’s movie.

Do you know this one?

I’ve never seen this. I’m watching it now. Thanks for sharing!

We got two submarine movues fans

What about The Hunt of Red October?

I have that 1 as well. I have quite a few. I just named a couple off the top of my head.

“Das Boot” is a very good movie.
I watched it too.

Totally loved “Vigil”, the theme song was very good too!

Will have to watch Das Boot at some point, since everyone seems to rate it so highly.

Regarding Vigil: there were a lot of “mistakes” from the view of the technical side.
Some statements were totally wrong, regarding the functionality of a submarine,
There are none in “Das Boot”
The author Lothar Buchheim (RIP) was a “Kriegsberichterstatter”
( war correspondent ) )
and the movie is really very close to the book.
(Buchheim checked the script)

Some scenes from the novel were not realized in the movie :
They stopped a huge passenger liner.
The 1WO found it in the “ship list” as an US-american ship. (troop ship)
The Commander ordered a boat to come to the submarine.
This didn’t come in time so they lanced a torpedo.
The torpedo failed.
Then the boat came and the captain brought the ship’s papers and it got clear the steamer was a Spanish one.
(5000 passengers to Buenos Aires)
The 1WO had not checked the appendix of the list were the ship was listed.
The steamer was sold to a Spanish company.
Now the ship’s name was “Reina Vittoria”.

Of course the names of the commanders etc in the novel (movie) are all fictive ones.
But there are great similarities to existing ones and their true stories.
No fiction.

I am also a fan of U571, more so for the audio mixing, and the depth charges being “behind you”

But here are so many things which are real fiction U571.
Of course it should be, its a movie.
But for me, I know a lot about submarines its often more than ridiculous.
But its a fictive story.

There is another one

Another Submarine Movie I enjoyed was Destination Tokyo.

I’m not sure anything holds up to DAS BOOT’s realism, but that doesn’t mean I can’t enjoy other Submarine movies as well.

The realism of “Das Boot” (movie) is not so easy to discuss about.
Best would be to read the book, which I suppose is quite close to realism.
And after reading one can find how close the movie is to the novel.
I will try to find that film.
Never heard about.
Great to see all sides of the “story”.