The Best Musician Nobody Knows 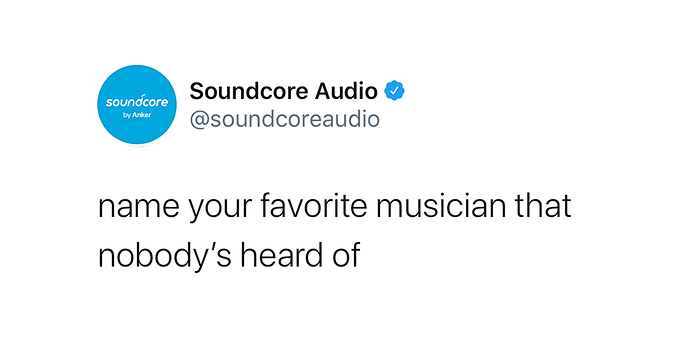 We know all too well that any old clown can pick up a guitar, scrape out a few chords, puke out some lyrics and get a number 1 hit. Just look at Nickelback.

But if only the appalling music was the worst thing about it. These losers are stealing the limelight from people who really know their way around a fretboard (… or Ableton

). But our entertainment is now fully controlled by “THE ALGORITHM”, and if “THE ALGORITHM” wants us to enjoy second-rate tunes, we have very little choice in the matter.

So today, I’m going to go toe to toe with the tech giants who pull the strings. I’ve got a handful of artists who definitely deserve a little more recognition, and you’re going to listen to them. Together, we can hoodwink “THE ALGORITHM” and help get some of these folks out of their mom’s basement and into Madison Square Gardens (or at the very least, a Kentucky dive bar).

The Bottom Line
Punk’s not dead! Oh, wait, yeah it is. It died the day that Jonny Rotten decided to advertise butter on British TV.

But just because the punk movement has been stabbed in the back by its iconic frontman, it doesn’t mean the music is any less awesome.
The Bottom Line has the rare honor of being a band that plays loud and fast but also happens to be extremely skilled at writing songs. They’ve had gigs supporting bands like Simple Plan and Waterparks, but their discography and full-on live shows prove they’re ready to headline their own tour.

22Bullets infuses the traditional sounds of his homeland with the EDM genres of Electro House and Melbourne Bounce to create a unique fusion that’s rapidly sweeping clubs and festivals around the globe. American DJ MAKJ even played some of 22’s mixes at EDC Las Vegas!

22’s EDM career has exploded in recent years. His 2014 hit “Burn Up the Club” found success outside his native Thailand, while recent collabs with Timmy Trumpet and MakJ have only further cemented his rep with ravers. Surely a spot at EDC or Creamfields is on the cards post-lockdown for 22 is he keeps landing the bangers!

Charles Bradley lived through poverty and struggle for most of his life. He finally found the recognition he deserved after the release of his first album “No Time for Dreaming” in 2011.

He would later release 2 further albums, 2013’s Victim of Love and 2016’s Changes.
Dubbed the “Screaming Eagle of Soul,” Bradley sang powerful love ballads and moving tracks which spoke of the struggles in his life.

Sadly, Bradley passed away in 2017, aged 68 after losing his battle with liver cancer.

Dagny
Scandi-pop perfection! Dagny is a singer-songwriter from Norway with a talent for writing pop songs that perfectly encapsulate the euphoric feeling of being in love. No dreary ballads here, every song is an explosion of shimmering synthpop and uplifting lyrics.

For the past few years, she’s been releasing EPs of her own songs, as well as collaborating with various DJs, including ‘Hit Your Heart’ with Steve Aoki in 2019. The first part of her debut album was released in late-May, with the second due to be released later this year.

So what about you guys? We want to see some recommendations for artists who deserve a little more recognition below!

Can’t wait to see what artists you all recommend!

He is very famous, but may be some of you don’t know him!
NO PUNK!

If I can choose artists already passed away I got many.
But I will not bore you.

First, I hope that Kentucky Dive Bar comment wasn’t sarcasm, because we get some great bands here!

Charlotte Wessells of Delain and Simone Simons of Epica. Both Rock/Symphonic Metal singers but awesome voices.

Bill Wurtz for sure!
He’s amazing.
All of his songs are free on his website, billwurtz.com (just click on songs once you’re there lol)
Go check it out! (I would recommend ‘got to know whats going on’ to start with)

It wasn’t sarcastic in the slightest!

My Jerusalem, I love the “a little death” album.

I would go with either Runrig or Blackmore’s Night. They aren’t quite in the no one has ever heard of them category, but way below what I think they should be.