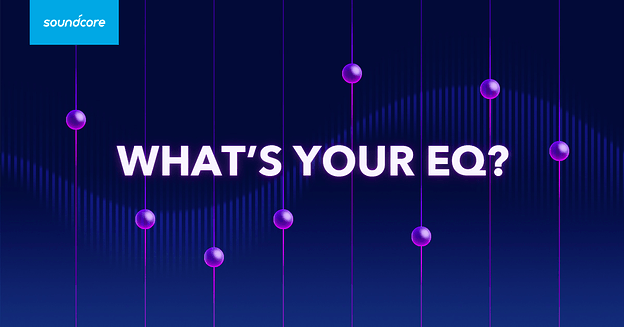 When I was a kid I discovered some knobs on my dad’s Hi-Fi system that seemed to change the sound of the music. I used to sit for hours ‘DJing’ and remixing my dad’s collection of 70s rock. In the end, the only thing I really learned was that my dad hated it when I touched his Hi-Fi.

Since then I’ve discovered that what I was actually doing was adjusting (ruining) the equalizer (EQ). 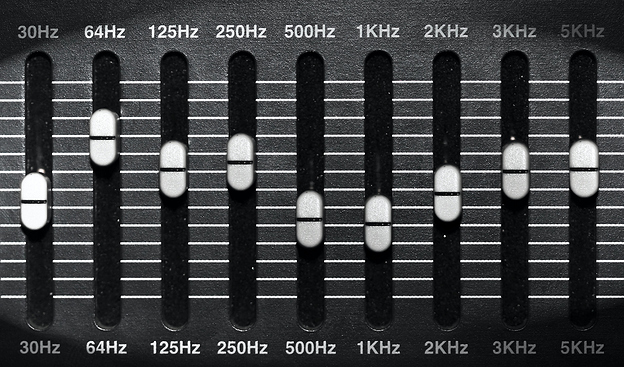 You’ve probably seen one of these before, whether it was on a physical Hi-Fi system or in the settings menu of a music player on your phone or computer. You might know that it does something to the sound, but what exactly are you doing when you move the sliders up and down?

The numbers along the bottom (and top on in the picture above) denote frequencies. Sounds with a low frequency (the numbers towards the left) are bass sounds, high frequencies (towards the right) are treble. As you move a slider towards the top, the system will increase the volume of sounds at this frequency. Conversely, moving a slider downwards will reduce the volume.

Perhaps the most common preset EQ setting that we see is ‘Bass Boost’. To recreate that on an equalizer like the one above, you can just shove the sliders on the left-hand side to the top. A ‘Treble Boost’ would be the same on the right-hand side, and ‘Balanced’ would mean that no sliders were moved at all.

So the natural question is, why would anyone want to change that stuff? Here are a few reasons:

Something important to bear in mind is that when you’re adjusting sound levels at such an intricate level, the results are often very subjective. What sounds good to you may sound like complete garbage to someone else. With that being said, there are some fairly well standardised preset EQs for specific types of music. At Soundcore we even have some special presets made by our Grammy award-winning producers.

What about you guys? Which EQ settings are you using in the Soundcore app? Or are you adventurous enough to adjust things specifically for your own taste?

If you’re lucky enough to have a set of Liberty 2 Pro or Liberty Air 2, you have the opportunity to use HearID which will intelligently adjust the EQ specifically for your hearing profile. Have you found big improvements in your music?

If you’re feeling especially adventurous, show us a screenshot of your personal EQ settings!

the only thing I really learned was that my dad hated it when I touched his Hi-Fi.

I have the Liberty 2 Pro, and keep changing EQ for different songs, and use the Boom App on iOS as well as Soundcore EQ while using with iPhone and Winamp EQ while connecting to Windows 10 pc

Liberty 2 Pro user and my default setting is Flat. If the bass seems a little overemphasized I sometimes switch to a custom eq with a small bass cut and if the bass is still too much I switch to the Bass Reduction preset.

Same - used HearID as well; I will say the other presets are accurate and adjusts the EQ as you would expect.

Adjusting the knobs looks pretty at first, but then I worry I didn’t get it right from one song to the next, and I just end up putting it all back to flat.

Nice! I currently don’t have soundcore headphones that let me adjust the eq but have played around a little on other devices

Every speaker needs a special adjustment of an eq depending on your hearing ability, the quality of recording
.
We talked about such eqs here a lot of times.
Here is how I adjusted the minis.
Bass 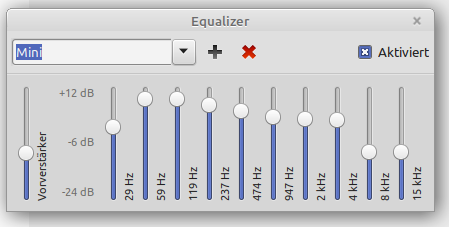 But when using Clementine the eq and the adjustments are others.

And I never use such presetting.

I have tried both of those; remember when they were both very new options and I was trying to figure out switching form iTunes. It was a little painful at the time, hopefully much better now. The problem is that I want a great music manager as well as a great music player, and most of the software I tried at the time wasn’t either.

Since then I moved everything to Google Play, and settled for a mediocre player and a very BAD music manager in exchange for extremely convenient access. But I may be reconsidering that soon, since Youtube music seems to be bad at both playing and managing, as well as being less convenient. And storage space on my phone has grown tremendously.

If you are talking about that Banshee and Clementine ->
I don’t know, I store all the music to my local local device here and I can import the playlists.
Seems both are better for LINUX, but they should work on other OS as well.
(They say so. Haven’t tried, can not try.)

And storage space on my phone has grown tremendously

These are the two custom EQ settings I have for my Soundcore Rave Neo. The “Deep Bass Boost“ reduces upper bass and boosts the lower bass to create a really intense bass effect on songs. My “Balanced” setting slightly boosts treble, to give the sound a nice sparkle. I use the “Balanced” setting for higher volumes, because the speaker can’t handle the boosted bass past 50% volume, the sound compresses and fluctuates in volume a lot if I push it. 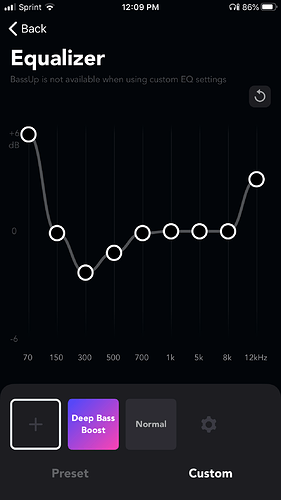 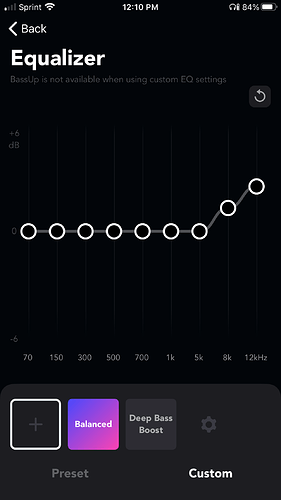 My parents and grandparents also hated it when I did that.

At my grandparents it was fun messing with the setting as those old country western song were playing.

Those old stereos had only two knobs for tuning the sound : treble and bass.
And when I take a look at my little (“modern” Sony stereo I use for listening to the radio (DAB+)
Which is HD in the USA. There is the same only Bass and treble. (+/-)

Yes, Banshee and Clementine. I have tried both.

iTunes can organize your library very nicely in folders, and add tags to mp3s (often automatically), etc. Or at least it could, back in the day. But it did not create playlists in m3u format, or pls - something proprietary in its database. Which makes migration a challenge.

I have a 64GB SD card in my phone now. Enough to hold far more music than I need, just a question of sorting it out.

Someone here may have pointed me to it, but I found and like Musicolet as an android music player - no internet permissions required, no ads, very simple and easy. Tried it out with a few minor things, now probably going to be migrating to that instead of GooglePlay Music.

I will try that with my Samsung tablet!

Did it.
“Poor eq” -> 5 frequencies only!
Rest is OK.
I will keep because its free from advertisings!

Of course you would start there, I hadn’t even looked at that tab! It also has preamp and base boost and reverb effects, I don’t know how those start to interact with the other options.

I really like the clean interface and lack of overhead and unnecessary permissions.

In most cases such a simple eq will do.
Preamp is no need.
The interface is simple, its free and there are no advertisings.
Thats what I like most.