Update on MusiCares’ Work During the COVID-19 Pandemic 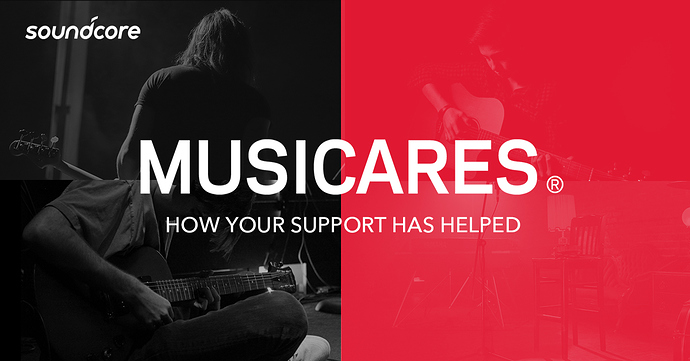 1200x628.jpg1200×628 272 KB
At the beginning of this year, we partnered with MusiCares—a charity founded by the Recording Academy. With their extensive knowledge of the music industry, MusiCares is able to provide support to artists in need of assistance across the United States. You may remember that back in February we held a livestream concert in support of MusiCares® and created a limited edition of Liberty Air 2 Pro. There are still a few available here, so if you want to make a donation to MusiCares to support their vital work, make sure you pick up a pair.

Soundcore’s donations have helped contribute toward MusiCares’ valuable work, which has helped over 37,000 music professionals since the start of the pandemic.

Here are some of the ways in which MusiCares has supported the music community:

Direct Relief: In response to the pandemic lockdown in March 2020, MusiCares distributed $1,000 financial assistance checks to music people for rent, groceries, utilities, and other living expenses.

“Help for the Holidays”: As the holiday season approached, MusiCares provided 4,000 e-gift cards to address growing food insecurity issues and need for basic necessities such as groceries, toiletries, and prescriptions.

Digital Resources: MusiCares offered over 25 mental health and addiction-related workshops, panels, and educational opportunities addressing topics such as: “Staying Sober During a Pandemic,”

Some testimonials from people who have been helped by MusiCares:

“I am speechless. Thank you for creating this fund and so generously providing this relief to me. I am feeling more confident that I will be able to come out of this crisis, remain in the music industry and continue to put more art and beauty out into the world. Thank you!” – Violinist, 32

“I really can’t begin to express how thankful I am. I can’t begin to accurately tell you how much this will change my life during this time. Sometimes, as musicians, we get scared that we will be left behind in this economy. We play shows for a living. We sling merchandise and we don’t know if anyone is rooting for the underdog. Your generosity has made me want to keep playing. When I win a GRAMMY one day, I know who I will be thanking!” - Drummer, 45

“I was stunned this afternoon when I received a check from your relief fund. The instant I opened the envelope, I cried. Slightly because I was in disbelief, but mostly because I felt instant gratitude for your organization and the relief. Your work is so important and it does not go unnoticed. I thank you wholeheartedly.” – A&R Director, 52

If you’re interested in learning more about MusiCares’ work, you can listen to our podcast episode from earlier this year when we chatted with Debbie Caroll, the Vice President of MusiCares:

If you don’t have a subscription service, listen HERE.

Thank you to everyone who has supported and donated to this valuable cause so far this year.

A very beautiful and noble initiative

.
This is evidenced by the statements of those artists who have already received help. Especially young and little known people in the music industry need it.

It is great to see the struggling artist, as they say, not have to struggle with a potential resource to help get them through some rough patches.

Many times many famous music artists helped people in need

Now we should help artists who find themselves in a difficult life situation.

A nice feel-good article to read. Thanks for stepping up, I’m sure it was greatly appreciated!