Well i can tell you this, after about 15 hrs it was down to about 30%. Then i went out for a walk in the forest and turned up the volume. Within an hour the battery was almost dead. After that it took about an hour of charging to get to 30%, after two hours it was 70% and it took another two hours to reach 100%. Total charge time from empty to full was 4 hours.

Can you screenshot / photo the manual and the underside of the case to show the charging specs? The FCC posting has 5V 3A.

What is your charger spec? (make / model or photo of it’s output spec)

That means the FCC posting is wrong, the input power is actually higher, or something else is amiss. The specs and performance don’t match.

Sorry i am not a tech pro like you. I just used my regular phone charger to charge the boom plus.

What was your phone charger (photo / whatever)?

You have the manual. Does it say 5V 3A input?

Does the underside of the speaker similarly show 5V 3A input?

Here are the pictures of my charger and the boom plus. 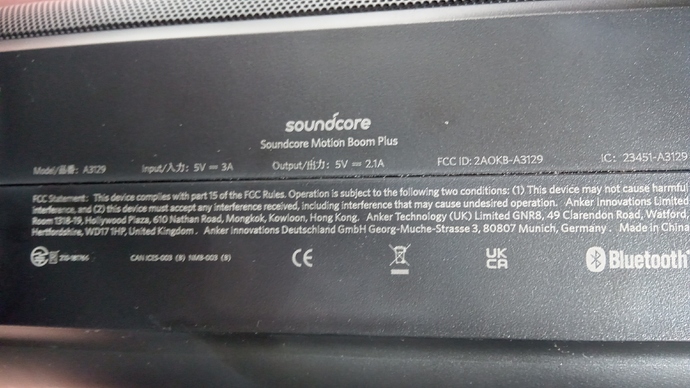 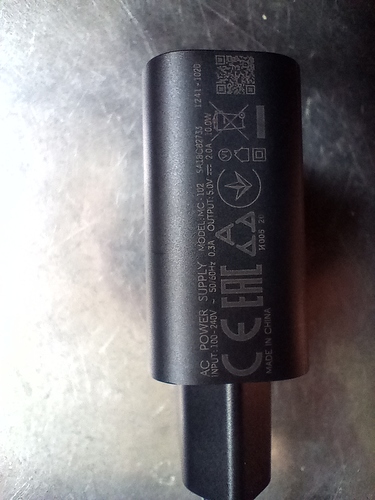 Thanks so it’s a 5V 2A charger and the released product is 5V 3A input.

You said it took 4 hours from nearly empty to full, so the claimed 13.4Ah cells with their FCC posting says is 7.2V so is a 96.48Wh battery, your 10W charger should if everything ran perfect 100% efficiency should have taken 9.6 hours, so I’d expect with some losses to be over 10 hours.

I told you like it is and posted the photos.
With that charger it took 4 hours to go from empty to full.
But what is it that could be wrong?
The battery from the speaker?

Appreciate the update, and glad you are enjoying the speaker.

If you have any songs that you found push the speaker to the limits, I’d be curious as to which ones

Not saying you’re wrong just a mystery. I showed the math.

For example it could be the battery indicator lights are pessimistic and it was half full not nearly empty? Try running it til it turns itself off next time?

So either Soundcore statements are wrong, or the battery indicators are misleading and should wait speaker turns off, or you had a dud unit with a bad battery, or…?

Also if everything was perfectly efficient 20 hours of 96.5Wh means it had to be 4.8W of the 80W so curious what battery life is like in real life.

Also from an engineering perspective it’s very odd to have 5V input to a 7.2V cell (usually made of two 3400mAh 3.6V in series) as you have insert DC booster circuit.

As more owners use the mystery will be resolved.

I’m trying to find out how my basic calculations are so off from what Soundcore have written, I found this:

(They wrote it twice)

So 5V 3A would take a minimum of 96.5Wh/15W = 6.5 hours so someone is wrong either about the specs or the recharge time inside Soundcore.

It also does question if you were near flat to recharge from 10W in 4 hours.

One potential explanation is they don’t let the battery discharge too much. One potential reason for that is because as cells discharge the voltage drops and as this is a high power device the speaker cannot function. If that is true then the 13400mAh is misleading as you don’t actually get to use 13400mAh and then would infer the 20 hours figure is a very low volume, or they turn the speaker off at higher voltage at higher volume meaning at loud volume the battery is flat very early.

Okay, well only thing i can do is try it again. One thing i notice is that my phone says the battery is 100% but the chargelight is still red. So maybe it wasn’t fullly charged the last time.
I will post again after my 2nd try.

Thanks. Run speaker til flat - it turns itself off, then charge til every indicator is full.

If I’m not right then means it is not actually a 13400mAh cell like you’d see in other products in that it can’t empty the cells as they turn the speaker off before empty, in which case that would mean the battery life cannot be anyway near 20h at a decent volume.

It seems like either the stated capacity is happy (off) or the voltage cut-off is set pretty high.

2nd try, battery was fully charged and the motion boom plus played for 28 hours this time. Volume was about 50% continuously and had bass up on all the time. Quite a difference from the previous 15hrs. And it took 5hrs and 40mins to charge it to full with my phone charger.
Besides that, the boom plus is a great speaker. But it really needs a custom EQ to make it come alive.

Thanks for confirming more performance metrics.

So your 5h40 confirms what Anker said in FAQ as well as 20 hour at reasonable volume.

So by elimination either your charger specs are misleading as it must be giving 5V 3A not 5V 2A.

Or, and I am suspecting this with increasing probability, the speaker turns itself off before all 13400mAh are consumed, but as it does do 20hr+ then that’s somewhat irrelevant to everyone apart from a geek.

I see more and more people complaining about the Boom plus.
Mainly about the harshness and batterylife.
Must admit getting 2nd thoughts myself, it’s really hard to make the speaker sound good all the time when playing different kinds of music.

So we’ve already concluded there’s something amiss in their power and battery life statements.

But you’ve also shown most probably the batteries are not as much as 13400 in terms of releasable energy.

So my current best guess is that the cells lower their Watt-hours as they discharge like all cells do, so if you play at a higher Wattage - more sound - then the releasable energy is less.

The harder you work a cell the less you get from it. Louder speaker is working cell harder. 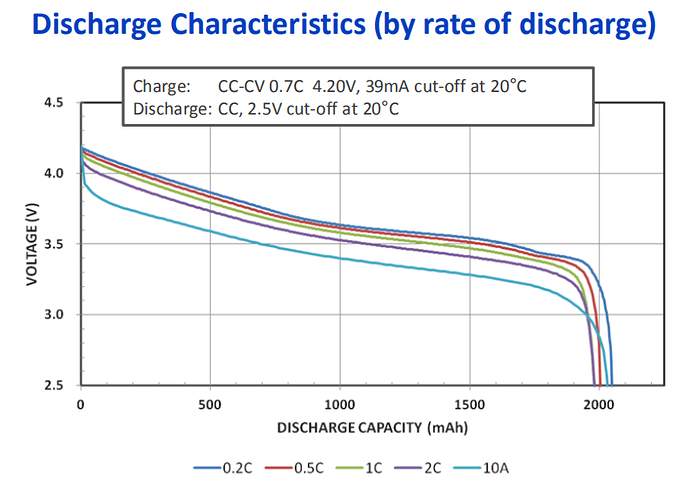 It would take someone with a USB meter to know more but as an example based on assumptions.

Assuming as they state it needs 5V 3A 15W that your 10W was a straight flat line (no trickle) then you injected 50.7Wh.

Assuming charging 90% efficiency the cells got 45.7Wh, of cells capable 96Wh so the cells discharged 47% of their energy.

Assuming the max volume of 80W speaker is say 30W (no distortion) and assuming 90% efficiency then the 45.7Wh would give 41Wh to speakers drawing 30W so battery life is 1h22m. That’s assuming they cut off power at the same Watts, actual would be lower if higher Watts made it cut off at a higher Watthours drained.

Very professorial. My mind is blown.