Who gets so drunk at an Ed Sheeran concert (or any concert) that they throw up? 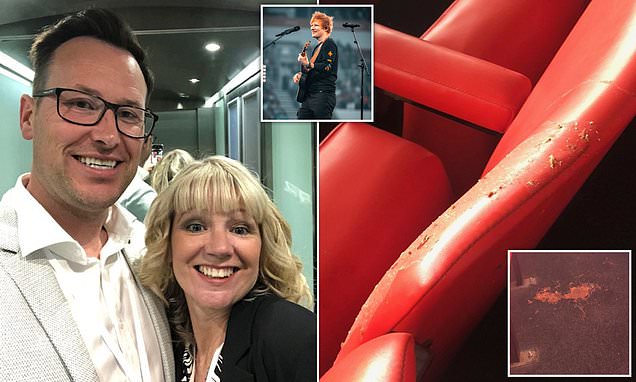 James Collier, 43, said he was left heartbroken after he forked out £720 for a top of the range hospitality package as a treat for wife Sue at the Stadium of Light in Sunderland.

Sadly, this is becoming the norm at concerts here in ‘Great’ Britain (I can only speak of those that I have been to, or read about), but why do folks feel that they have to either be so drunk that they can hardly stand? Or out of their faces on who knows what drugs. How can they appreciate the talent they have paid good money to see, and more to the point, will they even remember it afterwards.

Just last Friday, I was at a gig with a friend, and at the end we were all ushered out to make way for paramedics on their way in to the venue, who were rushing in to aid two females who had obviously had too much to drink and had collapsed. This is not an uncommon sight at concerts/gigs nowadays. It really is sad that folks cannot go along and enjoy the music without being $h*tfaced.

Out of all the day to day experiences, you will remember it because it stood out.

May be one could get drunk visiting the Oktoberfest but should not when visiting a concert.
I have never seen drunken persons in the opera.

I’d surmise maybe those being that sick, started a wee bit prior to the concert… I don’t get it, unless the tix were comps or money wasn’t an issue…

Yes it’s called preloading. As drinks are very expensive in licensed premises, they buy cheaper alcohol at supermarket and then drink before going out.

As the digestive system absorbs half the alcohol upto an hour later you effectively are still getting drunk on the way to the venue and then just one or two at the event gets absorbed along with what you were already ingesting still from earlier.

To a degree this is caused by expensive alcohol at events as it causes the consumption to begin earlier. If they consumed the same quantity at the event instead, they’d get to their worse condition at the end or after the event rather than nearer the start. Then there’s drugs also.

Also in summer you are worse at controlling heat exhaustion while worse for wear, that’s very common cause of medical attention in summer.

UK to the south and east hot today tomorrow. Expect a few deaths, answer is cool shade and water and other soft drinks.

Don’t like to drink during concert or sports events. But I know people do.

When I went to most of my Concerts I don’t remember people puking everywhere. Now it was a little cloudy in the venue and it smelled like a skunk was in there. Relatively harmless fun back then.

There is a little more decorum at the opera I am guessing, Oktoberfest maybe not quite so much

Another thing that seemed to be all the rage a few years back was for some ne’erdowells to throw their half-full plastic beer glasses into the crowd. Not knowing where they were going to land, or who they were going to hit. And sometimes it wasn’t beer that was in the glasses – disgusting!

What’s that show from back in the early 2000s Booze Brit ?

Usually water and an electrolyte replacement for me, pop tends to be diarrhetic…

I’d prefer to enjoy the event, and recall in totality vs. the contrary…

Dont forget that those drunken idiots are disturbing the show a lot and are molesting other visitors.

I avoid pop, soda, fizzy how ever it’s called as a general. Water is my favorite drink. Very very rare do I drink alcohol but when I do I prefer blackthorn apple cider

This is very true. I often have maybe a couple of beers before, or during a show, but never more than that, as I don’t want to miss out on anything, or spoil the show for anyone else.