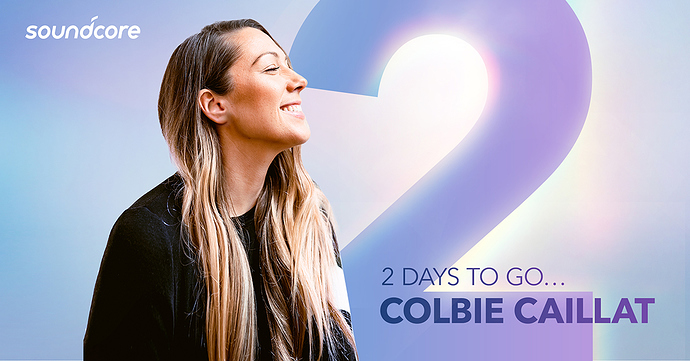 Meet Colbie Caillat, the next GRAMMY winning artist who is partnering with Soundcore for the launch of our all-new earbuds (in 2 DAYS)!

I’m assuming that everyone on the planet already knows Colbie’s breakthrough hit, “Bubbly”, a song so lovely and heartwarming that it makes me feel like I’m on a hot, sunny beach, despite the fact it’s winter.


It’s also got more than 330 MILLION streams on Spotify alone and is one of the best-selling digital tracks in history!

So far in her career, Colbie has received 5 GRAMMY Award nominations and won 2: Colbie and Jason Mraz’s mega-hit “Lucky” won a GRAMMY for Best Pop Collaboration with Vocals and she featured on “Breathe” by Taylor Swift from the album “Fearless” which also won a GRAMMY for Album of the Year.

Since a friend uploaded Colbie’s music on MySpace back in 2007, Colbie has sold more than six million albums and ten million singles worldwide, and her songs have appeared in the soundtracks to numerous TV shows and movies throughout the years. Last year she was featured in an episode of the Disney+ docu-series, “Becoming”, which details her journey in the music industry and how she overcame crippling stage fright.

Colbie is also a talented songwriter and one song that I think is particularly poignant is “Try”, a song that discusses the hardships women in the music industry face.

And she also penned, “Brighter Than The Sun”, which I think we can all agree is a perfect example of an upbeat summer song

From 2018 through to 2020, Colbie and her friends were in a band called Gone West and they released a country-pop album which included the single, “What Could Have Been”.

So, are you a fan of Colbie’s music? Does “Bubbly” bring back any particular memories? Let’s chat in the comments!

DON’T FORGET: The #AudioEscape livestream launch for our new earbuds is happening on Tuesday January 12, 2020 at 09:00 AM (PT) on Soundcore.com, and our Twitter and Facebook accounts. Don’t miss it!

“Bubbly” brings me waaay back with memories !

Me too! It reminds me of being at school

These are classics!! Lucky, Breathe and Try…
Especially Lucky is always on the list of my favorite music
So nice to know Colbie is partnering with Soundcore now

Thought I knew this person, been so long since I’ve heard bubbly.

I got my calender set. I hope the buds are a success.

She is a great choice for a Grammy artist for soundcore

First time I heard her. She has a nice voice!

Cheer my hat is safe for now!

And wow the country track is unbelievable!!!

I remember some of her songs!

Never heard of this artist. Outside of my music taste.

Didn’t know the name of the artist or the song, but I hit play on bubbly and recognized from the first notes. Brighter than the Sun was also familiar, not the others. Good choice.