If you are looking for a great set of earbuds that happens to have ANC, look no further than these guys… the life P3…

Nothing fancy for the packaging, more so the standard cardboard box and liner holding the case and ear tips. Included in the box, is another small box that holds the charging cord and tips. The standard literature is included as well. 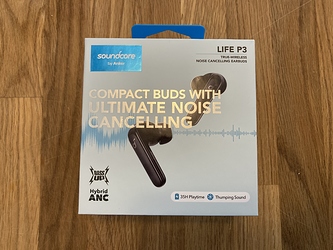 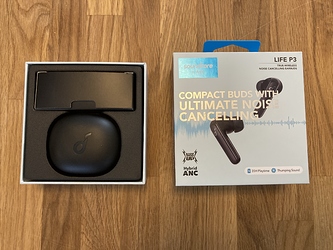 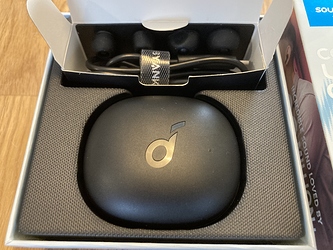 While not the premium experience of either the liberty 2 pro or liberty air 2 pro, I’m not looking for fancy on these, so neither here nor there. 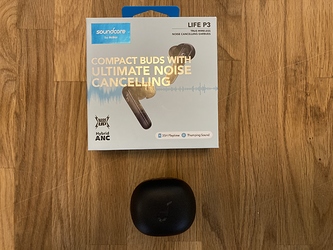 The stems on the life P3s are narrower than those of the liberty air 2 pros. They nestle nicely into the crux of your ears and feel solid in place.

The tips seem to be similar to the standard ones for the other earbuds, and again I find myself lucky to have the mediums be pretty good right out of the box. 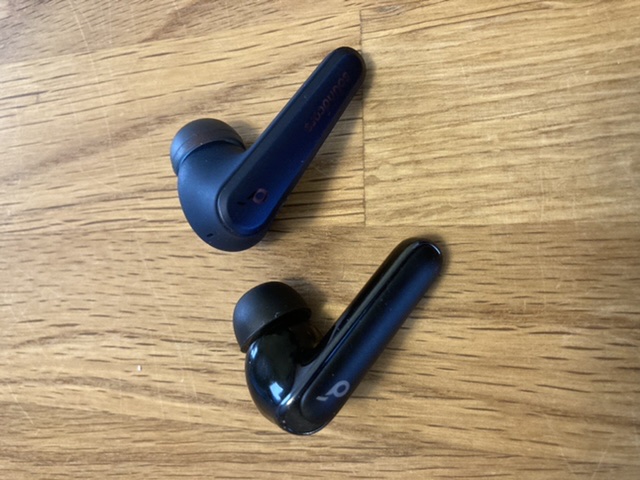 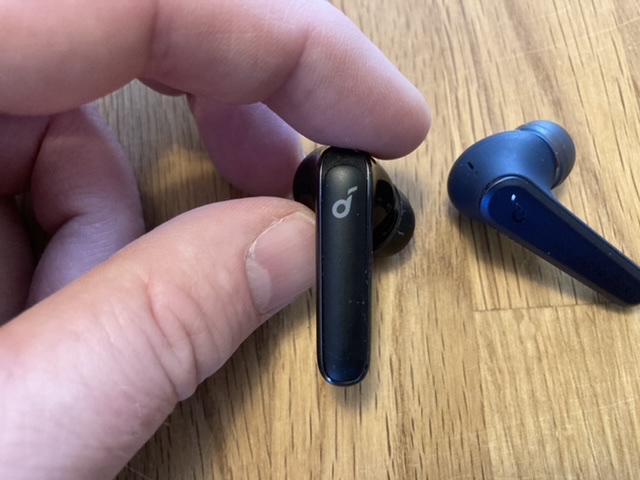 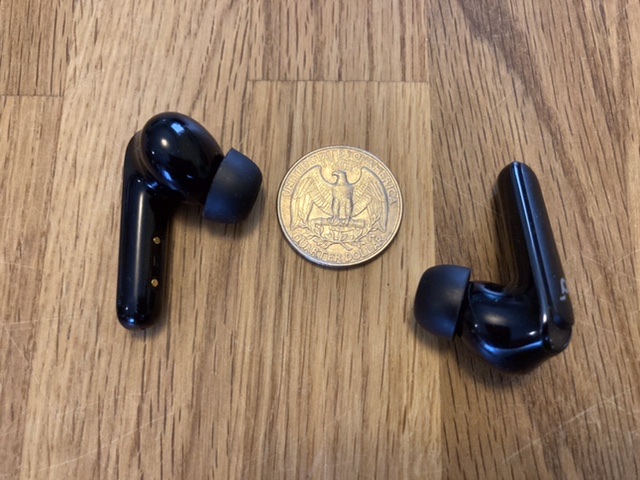 Unlike the liberty 2 pros, the life P3s are more flush with the surface of my ears, and don’t seem to stick out quite so bad.

Verdict on fitment: A

Narrower stem and good fit right out of the box! Secure fit and lower profile. Not quite secret service in appearance, but darn close 🤫

The case is your typical flip up style case. However, with one important and impressive distinction from others.... the lid is a soft close lid, and also stays up when open. Not sure what type of voodoo magic is at play, but very nice surprise. 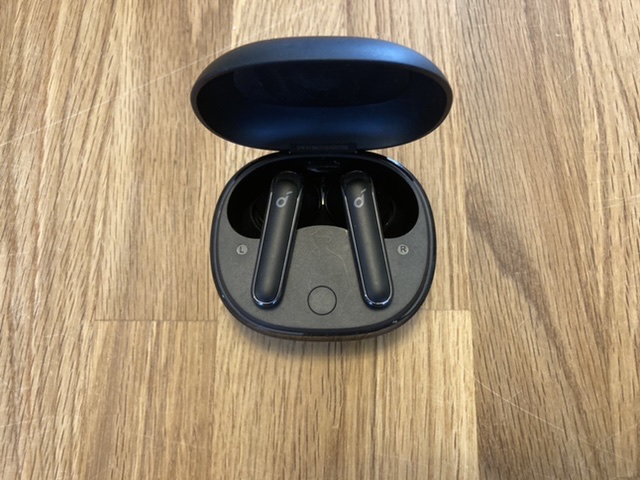 In comparison to the liberty 2 pro and the liberty air 2 pro, which boast a slide back lid, the life P3s hold court with similar size and weight. 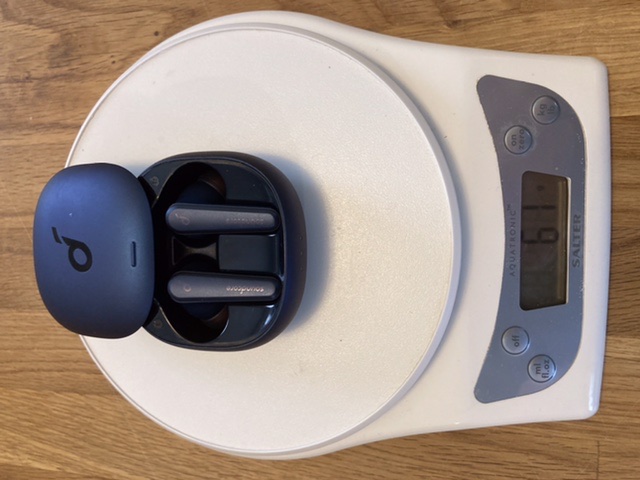 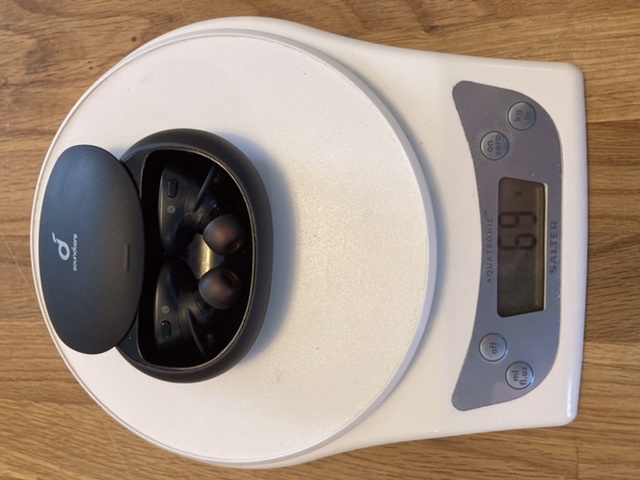 When time to recharge the case, the front led lights keeps you apprised of the status / battery level. After running down to naught, and starting fresh, complete charge took about 2 hrs and then the lights turned out to indicate complete. I did not know this was a feature

Verdict on case: A+

I thought I really liked the slide back style lid, but this lid is WAAAY better! 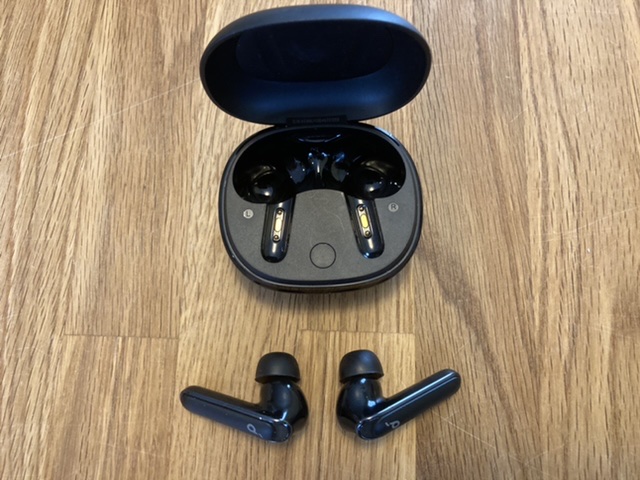 The earbuds are the stem style, and have touch controls. The profile of the stems is more of a “traditional” look than the liberty air 2 pros. The touch functions are limited to start, but within the app, you can customize the touch controls almost to infinity... and beyond. 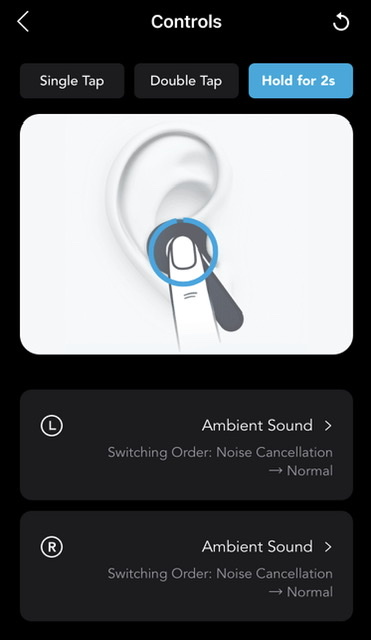 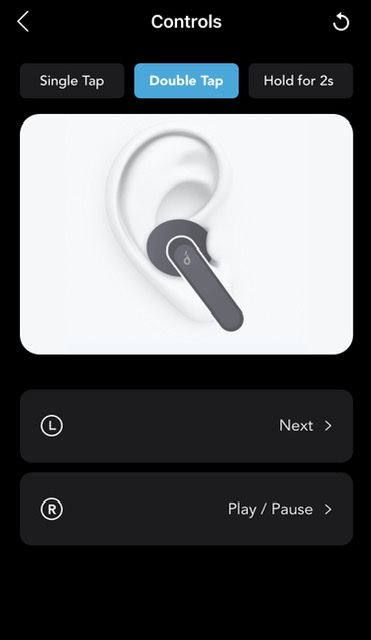 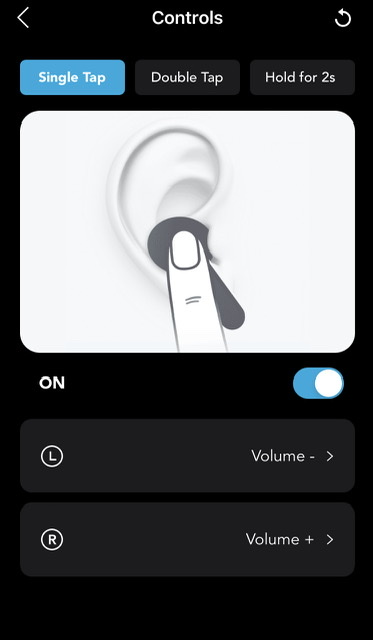 These fit in the ear quite well, and don’t require a lot of fussing about to get them locked in place.

Weight wise, these are on par with the weight of the LA2Ps, which both are less than the L2Ps… not that either is much… but could potentially impact all day wearing and overall comfort… 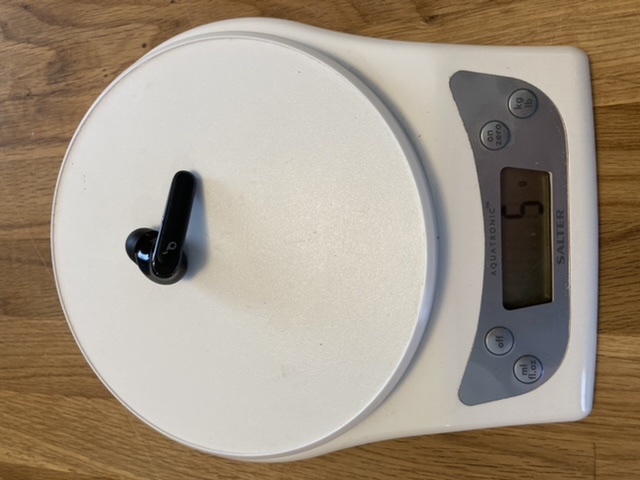 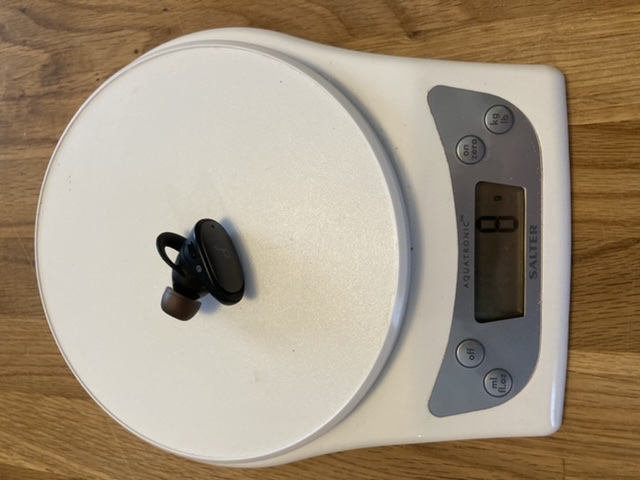 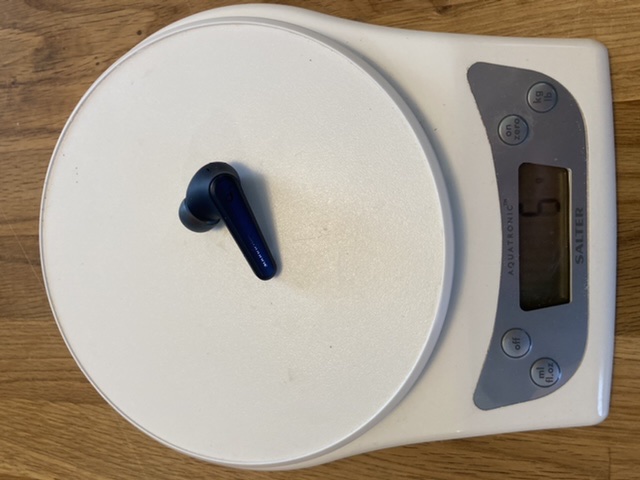 Verdict on earbuds: A

Comfortable fit and can wear these all day without issue.

I used these earbuds, with many of my past headset testing songs. Below are the ones I listened to, and my thoughts on what was good / not so good.....

Demi Lovato - I c you

5 Finger Death Punch - To Be Alone

The Pretty Reckless - Only Love Can Save Me Know

Golden Salt - Ballad of The Crow

Barbie Sailors and Violet Orlando - No Time To Die

The app has many presets for the equalizer, similar to that for the liberty air 2 pros, liberty 2 pros, and even the flare speakers series. For testing out sound quality, I like to use either flat or acoustic to get a true sense of the song.

I did find that switching out to that Soundcore signature eq setting, seemed to have a more muted sound that what I prefer, so typically I don’t use that.

The eq also allows for custom adjustments, and often audiophiles seek the harman curve target… I can’t say for certain how to achieve that with these earbuds, but I haven’t really given it a go…

Verdict on sound: B

Bouncy bass, unrivalled customization for eq, an incredible amount of presets. Good on almost all of the songs, great on a few and okay on others. Not sure what to think about the shift when moving from the signature to flat / acoustic...

I’ve been using these as my go to’s at work since receiving. The ANC is strong, and offers three modes, like many of the other Soundcore ANC products. Indoor, outdoor and tranport modes. There is also transparency and of course ambient mode.

Indoor setting, drops out a crazy amount of the background noise. At times, I’ve been spooked as I haven’t heard those sneakin up behind… great to take out the louder noise at the office. 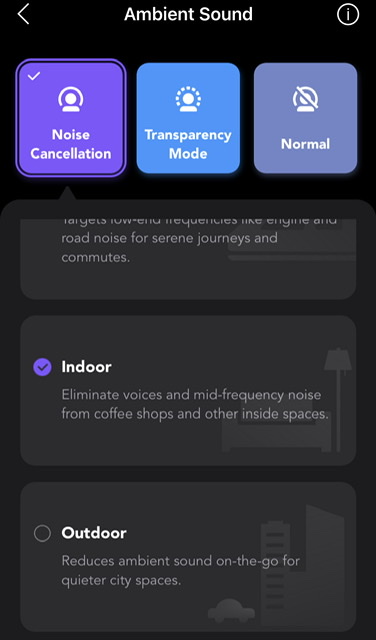 Outdoors, they work really well to drop out the loud sounds of a snowblower.

When both earbuds are in, you can cycle through the ANC modes through touch sense on either earbud.

Verdict on ANC: A

Just as good, if not better than that of the liberty air 2 pros. To be fair, I have not done the fit tip test for the LA2Ps, which I understand is a critical step for proper fit and even better ANC function.

A new feature addd into the app, for the life P3s, is a sleep mode. This mode give the user an ability to mix in various white noises. Ranging from water drops, bird singing, wind and waves, there is a great variety to develop some really relaxing sounds for those days that you need it.

ED94CC4C-DD2E-4CA4-8C38-6BDB60C27EF1.jpeg371×640 30.8 KB
I’ve only used this a bit, as the earbuds aren’t super comfy for laying on ones side for sleeping, and can’t take full advantage of this feature. For use in a vehicle (as a passenger) this would be pretty good if not listening to music.

Verdict on sleep mode: B

I believe the app now has white noise feature for use with other product, and not just these. Good and fun to use, at present I haven’t tested it out much. Can be a nice distraction from music, when needed.

I found this to be a really curious feature, and attempted to use it multiple times (on purpose 🙄). Wasn’t until many attempts later that it clicked to turn up the volume on the phone to have the feature work....

The premise… should one lose a coveted earbud, the find my earbud should help… however, the sound made is a high pitch tone, and unless your device has the volume cranked it really is inaudible.

Now, I did figure this out today at work, so with volume cranked, I could hear the tone quite easily.

Would be nice / better if the tone was similar to that of the Fitbit sense when trying to find your phone. That may alleviate the warning to not have your earbuds in, when attempting to find them…

Verdict on Find My Earbuds: C+

Great idea, but lack of info on initial use, coupled with the high pitch tone makes this not overly usable for me.

I was quite surprised after testing these out extensively at work. Through a combination of ANC days and just plain use (no ANC), the battery life was considerably better than the liberty air 2 pros. Six hours in, I’d receive the first notice for battery low, and an hour later time to charge.

With ANC on, battery life averaged in just over 6hrs, a substantial improvement from the air 2 pros.

Verdict on battery life: B+

Final overall verdict of the life P3s: B+
An improvement over the liberty air 2 pros, by close to an hour in both settings. But shy of the battery life on the liberty 2 pros by a similar amount.

If your are looking for a great stem style earbud, with unbelievable battery life and solid ANC, these are a great choice. Throw in gaming mode (not for me) and the sleep mode (white noise), these should do you well. Could use an update on the find my earbud feature, but doubtful that would be the coup d’état for buying.

Pricing is pretty comparable between all three, and at any given moment the P3s can be had for a song…

Thanks for your time, hope you found a couple points of interest

Thanks for the thorough review.

Do you think the P3 is the sucessor to LA2P?

Thanks for the review

I could see a consolidation or merging of the LA2Ps into the P3 line. As the P3s are more of a traditional stick style and an improvement in many ways.

I like the fact you measured their weights. Best conclusions come from the most facts.

Cool. I saw the P2i teardown suggests we’re approaching the point the electronics can make a really thin stick just with antenna and microphone and possibly just a few electronics. I saw the thread ask for much smaller buds and how someone preferred the LA2 over LA2P due to thickness of the part in the ear canal. So there’s scope for something radically different both being asked and capable of being made.

I may do a teardown comparison thread to show what I mean.

If I win something I may also do a review thread of item but all I’ve got from Soundcore recently was a Mini 3 which was already reviewed.

Nice Review. Thanks for sharing!

Excelent review and nice photos. Thanks.